We’re excited to announce a new on-going feature for our blog – a how-to guide to building a Minecraft arcade cabinet. We’ll be documenting the entire process from beginning to end, warts and all. Since we’re big believers in learning from failure here at the MakerBus, we’ll be documenting every success, every failure, and every lesson we learn along the way.

Let’s get started by looking at what will be the heart of our Minecraft arcade cabinet, a Raspberry Pi computer. If you’re unfamiliar with a Rasberry Pi, it’s an open-source miniature computer no bigger than a tin of mints. These versatile computers were developed in the UK in 2006 and in a few years have sold more than 2.5 million units world-wide. I’m using a Raspberry Pi as the core of our arcade cabinet for two reasons: 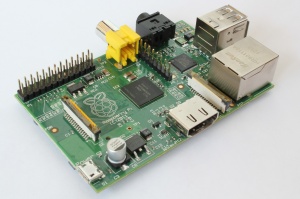 1. It’s incredibly cheap! Websites like Newark Canada sell Rasberry Pi starter kits for $43. These kits come with everything you need to get your computer up and running. I’ll be installing the open-source operating system Raspbian (an offshoot of the open source operating system Debian) on our Raspberry Pi. This is a free OS that is extremely versatile and is a great introductory tool for getting people started learning about computer programming. What’s more, the Raspbian version of Minecraft is available for free download.

That’s about it for the first instalment in our project to build a custom Minecraft arcade cabinet. In our next post we’ll examine how to get Minecraft up and running on a Raspberry Pi. If you have any comments, questions, or suggestions please let us know.

If you’re interested in building your own Minecraft arcade cabinet, we’ll be collecting a list of potential resources that will help get you started with your project.

Where to buy a Raspberry Pi

Learn more about the Raspbian version of Minecraft